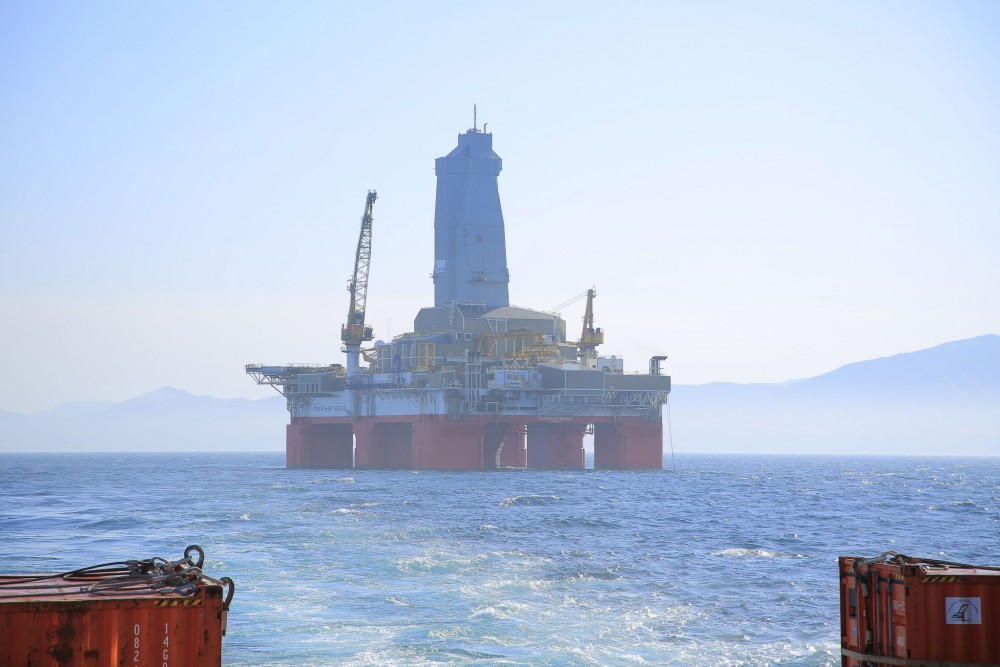 Drilling rig "Severnoye Siyanie" is on its way to the Kara Sea where this year's first offshore Arctic well will be drilled.
Read in Russian | Читать по-русски
By

The semisubmersible rig on the 17th of July set out from Murmansk with course for one of Gazprom’s remote Arctic license areas. Five days later, it had reached the Kara Gate, the strait that separates the Barents Sea and the Kara Sea. The installation is accompanied by Neptun, a 74 meter long tug as well as service ships Kazanin Explorer, Bakhtemir and Murman, data from ship tracking services show.

Both of the latter ships are operated by the Marine Rescue Service (Morspassluzhba), a state company that in June this year signed a cooperation agreement with Gazprom on offshore Arctic drilling services.

It is not yet clear in which license area the Severnoye Siyanie will operate, but over the last years Gazprom has drilled at the Leningradskoye, Skuratovskoye, Rusanvoskoye and Nyarmeyskoye, all of them fields located in the Kara Sea along the western coast of Peninsula Yamal.

Russia has over the past years stepped up exploration of Arctic waters and drilled a number of exploration wells. Since the Russian attack on Ukraine in 2014, the operations have been conducted without foreign partners. But western ships and personell have still been indirectly involved.

Over several years, Chinese drilling rigs have operated for Gazprom in the area, and several of the offshore supply ships that have accompanied the rigs have been Norwegian.

In 2021, the Italian jackup rig Perro Negro 8 drilled in the shallow Gulf of Ob. It was originally planned to continue operations this summer. However, after its winter break in Kirkenes, Norway, it in spring 2022 set course for other waters.

The decision to abandon the area followed Russia’s onslaught on Ukraine.

Unlike the previous years, the upcoming drilling in the Kara Sea appears to be conducted without any foreign participation. The Severnoye Siyanie drilling rig is owned and operated by Gazprom and the tugs and service ships all carry Russian flags.

The Chinese rigs are unlikely to return to the Russian North any time soon.

This year’s Russian Arctic drilling starts as there is still plenty of sea-ice in the northern parts of the Kara Sea, as well as along the coast of archipelago Novaya Zemlya. However, the oilmen consider the area safe for drilling. Over the last week, service ship Murman has mapped local ice conditions and installed censors that will inform about approaching icebergs.

A drifting ice sheet is located 40-50 meters from the drill site. But this does not pose a threat to the drilling operations, representatives of the Marine Rescue Service told PortNews.

Data from the Russian Arctic and Antarctic Research Institute show that the lion’s share of Russian Arctic waters by 12 of June remained covered by sea-ice.