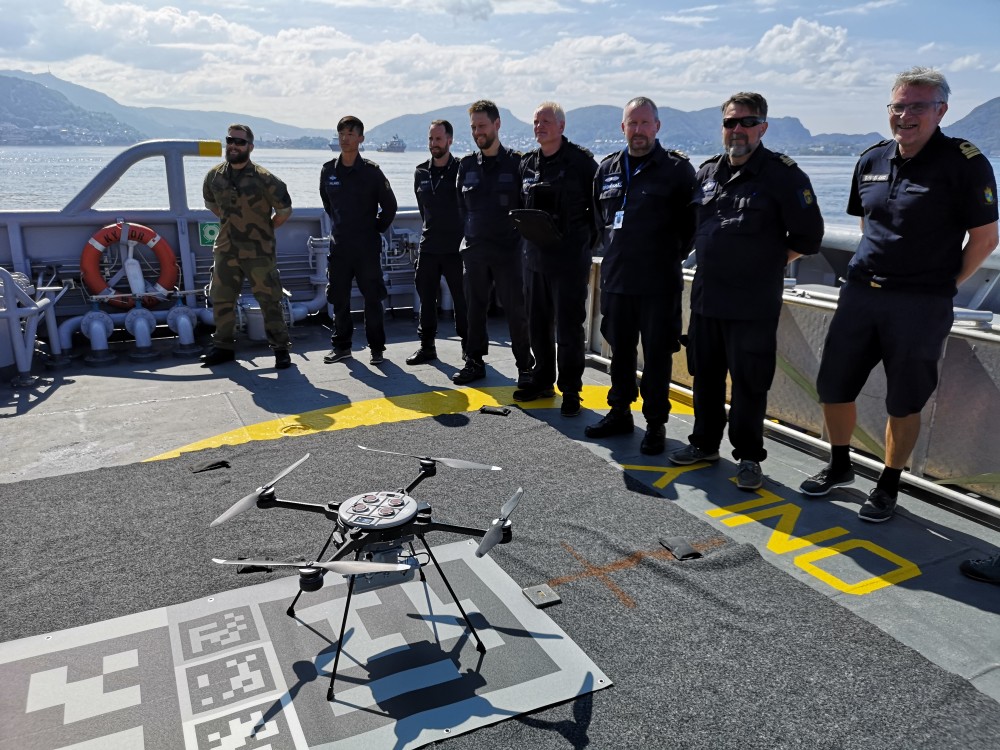 The first drone to carry a radiation detector was tested from the Coast Guard vessel "Tor" which patrols the west coast of Norway. Photo: Norwegian Coast Guard

Five Coast Guard ships are soon to carry drones with sensors capable of detecting radioactivity in case of a maritime accident involving a potential release from a reactor-powered civilian or military vessel.
Read in Russian | Читать по-русски
By

A sharp increase in nuclear-powered vessels and ships with radioactive materials pose an increasing risk of accidents, a recent radiological- and nuclear risk assessment study for the Arctic Council concludes.

The risk is moderate and increasing in regards to nuclear-powered vessels and floating nuclear power plants, the report reads.

Now, authorities take action and deploy drones with radiation detectors on board Norway’s fleet of five Inner Coast Guard patrol vessels, from the North Sea region in the south to the Barents Sea in the north.

The danger is obvious. A worst-case scenario is a nuclear-powered vessel with a reactor leakage drifting at sea or running aground with a wind direction towards populated areas. In northern Norway, nine out of ten inhabitants live less than four kilometers from the sea.

A drone can help measure levels of radiation in close vicinity to the vessel in distress without exposing any of the emergency response teams to danger. The Coast Guard is already on 24/7 watch and plays an important role in emergency preparedness.

Nuclear-powered icebreakers are more frequently sailing between the yard in St. Petersburg and their homeport in Murmansk, like this weekend when the newest icebreaker, the “Arktika“ sails around Scandinavia a few nautical miles off the coast.

The civilian nuclear-powered “Sevmorput” is also regularly sailing between the Far East and St. Petersburg via the coasts of Siberia, Norway, Sweden, Denmark, Poland, Estonia and Finland loaded with seafood and other products. The ship is 33 years old and is not allowed to make port calls to countries outside Russia.

Every now and then, cargo vessels bring spent nuclear fuel or radioactive substances to the port of Murmansk.

Caused by increased military tensions, both NATO and Russian nuclear submarines are more frequently patrolling the strategically important North Atlantic. Allied submarines even make port calls to harbors in Norway, like this spring when “USS New Mexico” came to Tromsø in a high-profile visit.

Detailed emergency response plans were made ahead of the submarine’s visit. For Norway, which has a comprehensive network of radiation detectors on land, the challenge however is what to do if something happens at sea.

“The Coast Guard has pilots and training ready. When the sensors are delivered they will be deployed to the ships,” says Lt. Cdr Stein Magne Eidissen to the Barents Observer.

He says the project is a cooperation between the Coastal Administration, the Radiation and Nuclear Safety Authority (DSA), the Maritime Authority, and the Coast Guard.

Lt. Cdr Eidissen adds that the Outer Coast Guard vessels, sailing Arctic voyages in the Norwegian and Barents Seas all north to Svalbard, later will be equipped with similar systems for radiation detection as the Inner Coast Guard now gets.

Additional to the drone in operation onboard “KV Tor”, two detectors are delivered and under testing, while two more will come next year.

The Coast Guard will use drones also for fisheries inspections, search- and rescue, oil pollution and different police tasks.

Norway’s Inner Coast Guard includes the five vessels “Nornen”, “Tor”, “Heimdal”, “Njord” and “Farm”. The latter has Kirkenes as homeport and sails the waters closest to Russia’s Kola Peninsula where several tens of nuclear-powered submarines are based as well as being home to the increasing Arctic fleet of nuclear-powered icebreakers.

Two brand new icebreakers, powered by two reactors each, will be added to the fleet before the end of the year. The first is this weekend en route along the coast of Norway from St. Petersburg to Russia’s ice-covered waters around the Yamal Peninsula and the Kara Sea.

In October, a team of experts from the Norwegian Radiation and Nuclear Safety Authority (DSA) and the Coast Guard worked together with experts from the U.S. Department of Energy’s National Nuclear Security at the Nevada Test Site. Together, they tested how the drones could be used for detection. The former nuclear weapons polygon in Nevada has a skilled staff developing remote-controlled vehicles for measuring radiation.

The drone to be deployed by the Norwegian Coast Guard became the first to fly down the famous Sedan Crater to measure radioactivity.

Two years ago, the Norwegians and Americans sailed north to Svalbard together with Russian experts from the emergency response unit of Rosatom, working on remote-controlled systems for measuring radiation in case of accidents.

Collaboration on nuclear accident preparedness is a priority for all circumpolar nations which agree that shared resources in sparsely populated areas benefit all.

“Our emergency preparedness in coastal areas and at sea has not been good enough,” says Øyvind Aas-Hansen, senior advisor with DSA’s Section High North in Tromsø. In a phone interview with the Barents Observer, Aas-Hansen praises the cooperation with the Norwegian Coast Guard. “The Inner Coast Guard has a well-trained crew. They are a very good resource for emergency preparedness along the coast where the majority of the Norwegian population lives,” he tells.

“We never know where accidents might happen. But with the Coast Guard and their skills on operating drones, we are about to become world-class in preparedness,” Aas-Hansen elaborates.

“The new drone detectors for radiation are unique. What we learn from this is something we absolutely will share with other nations,” says Øyvind Aas-Hansen. He underlines that cross-sector collaboration with other agencies in Norway has brought the project forward. “DSA is a small player, but together with the Norwegian Coastal Administration, the Coast Guard and the Joint Rescue Coordination Centre of Northern Norway we had the perfect team.”

It is the Coastal Administration that owns the drones and was the initiator of the pilot project to take detectors into use.

In May 2022, the partners will test the systems in a large international Arctic radiation exercise in the area around Bodø, northern Norway.

The Barents Observer has published an overview (pdf) listing the increasing number of reactors in the Russian Arctic. The paper is part of Barents Observer’s analytical popular science studies on developments in the Euro-Arctic Region.

According to the list, there are 39 nuclear-powered vessels or installations in the Russian Arctic today with a total of 62 reactors. This includes 31 submarines, one surface warship, five icebreakers, two onshore and one floating nuclear power plant.

Looking more than a decade ahead, the number of ships, including submarines, and installations powered by reactors is estimated to increase to 74 with a total of 94 reactors, maybe as many as 114. Additional to new icebreakers and submarines already under construction, Russia is brushing dust of older Soviet ideas of utilizing nuclear power for different kinds of Arctic shelf industrial developments, like oil- and gas exploration, mining and research.

Although Russia’s existing “Akademik Lomonosov” and four planned floating nuclear power plants are to operate on the coast of the Chukotka Peninsula thousands of kilometers east of the European Arctic, maintenance, testing and change of spent nuclear fuel elements will take place at the Atomflot base in Murmansk, a city with about 300,000 inhabitants a few hours drive from the border to Norway.

“By 2035, the Russian Arctic will be the most nuclearized waters on the planet,” the paper reads.

Also, existing icebreakers and submarines get lifetime prolongation. The average age of the Northern Fleet’s nuclear-powered submarines has never been older than today. Several of the submarines built in the 1980s will continue to sail the Barents Sea and under the Arctic ice cap until the late 2020s.

On July 1, 2019, a fire broke out on the top-secret deep-diving submarine Losharik on 60 nautical miles from Russia’s border to Norway. The submarine was at the time working on the seabed in the Motovkiy Bay, just north of the important navy bases of the Northern Fleet. All 14 sailors on board were killed in the fire that likely started in the batteries.

Losharik was powered by one nuclear reactor and operated on a secret mission for GUGI, the Main Directorate for Deep-Sea Research, a top-secret unit directly subordinated the General Staff of the Russian Armed Forces.

No leakages of radiation were reported at the time.

Later that summer, on August 8, a serious radiation accident happened in the waters just outside Nenoksa naval missile test site on the southern shores of the White Sea.

Five Rosatom experts were killed and at least three others injured as a Burevestnik missile exploded. The Burevestnik is a nuclear-powered cruise missile currently under development by the Armed Forces. The small reactor is aimed at giving the missile “unlimited range”.

Shortly after the blast, radiation levels in the nearby city of Severodvinsk were measured to be several times higher than background for about half an hour, the Barents Observer reported. The data was based on the public automated monitoring system in Severodvinsk with eight sensors in town and at the Zvezdockha shipyard.

While normal background in the town with a population of 190,000 is around 0.11 µSv/h (microsievert per hour), the levels measured at the monitor on the Lomonosov Street near Lake Teatralnoye peaked at 2 µSv/h, nearly 20 times higher gamma radiation than normal. That, though, is still way within permissible levels for population exposure.

“The development will bring, additional to the military challenges, also challenges related to both environment and security. In 2019, about 25 Russians were killed during military activity near Norway,” the Intelligence Service Director Morten Haga Lunde said and added: