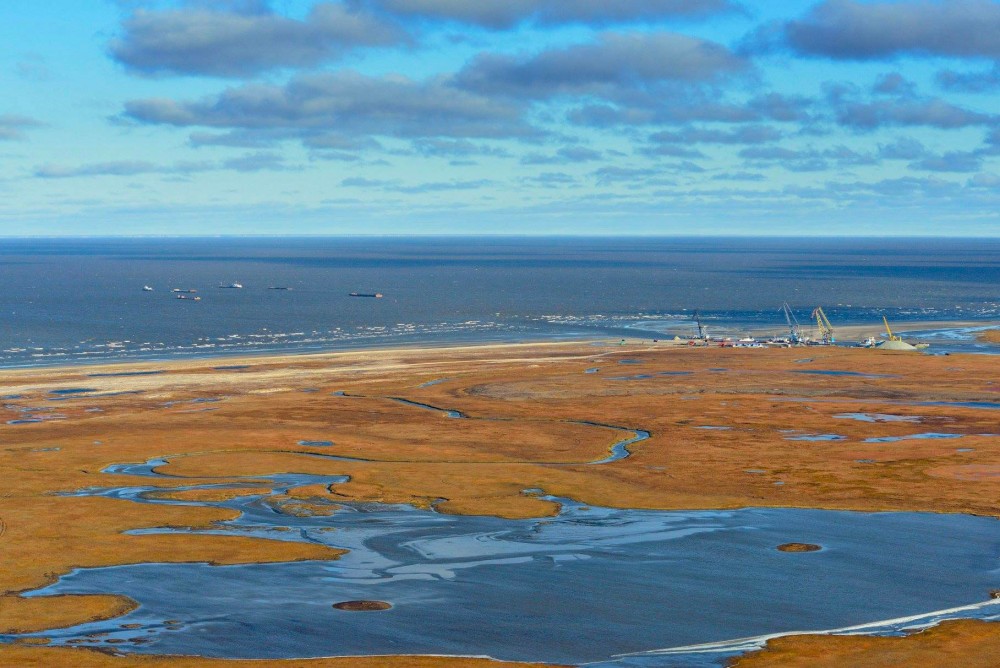 Along the Gulf of Ob is the tundra of the Yamal and Gydan Peninsulas. Photo: Novatek

Oil reserves and natural gas in abundance. The Ob Bay and surrounding peninsulas of Yamal and Gydan is like a vast bubble of hydrocarbons waiting to be untapped.

This is now a top priority region for the Russian oil and gas industry. From before, Gazprom and Novatek have opened large projects like the Bovanenkovo and Yamal LNG in the Yamal Peninsula, and the same two companies are in the process of developing several more projects like the Kharasavey and Arctic LNG 2.

Also offshore resources are being explored. Over the last years, offshore drilling has been conducted in the nearby Kara Sea, including in the Leningradskoye, Skuratovskoye, Rusanvoskoye and Nyarmeyskoye fields.

Also Rosneft is in full swing. Company leader Igor Sechin in late August confirmed that he has two rigs engaged in the waters outside archipelago Novaya Zemlya. Well drilling at the Vikulovskaya and Ragozinskaya started on the 22 July and is conducted by two rigs that have been towed to site from Murmansk, Sechin told President Putin in a meeting.

From before, it is known that that the Chinese rigs Xin Guang Hua and Nan Hai Ba Hao are operating in the area in cooperation with Gazprom.

Well drilling in the Gulf of Ob is not a new thing. Oil companies have for years comprehensively studied the shallow waters that connect the Ob River with the Kara Sea, and in 2019 a rig drilled wells at the Severo-Obskoye and Geofysicheskoye license areas.

Both fields are planned to become key parts of Novatek’s resource basis for new projects, including the Arctic LNG 1. The drilling was conducted by the Amazon, a rig owned by Gazprom Flot.

This year, the Amazon, as well as the Arkticheskaya, are undergoing upgrade and modernization in Murmansk. But exploration in the area is still proceeding.

According to the Marine Research Center, a unit of the Moscow State University, a public hearing on additional drilling at the Geofysicheskoye field is held in September this year.

Following drilling in 2019, geologists increased resource estimates for the Geofysicheskoye to 413 billion cubic meters, newspaper Kommersant reports. The resources are planned applied in the Arctic LNG 1 project along with resources from nearby fields like the Gydanskoye, Soletsko-Khanaveyskoye, Trekhburnoye and Bukharinskoye.

The Geofysicheskoye is located partly on shore, partly offshore.

Among the offshore projects that are first in the line is the Kamennomysskoye-More, where production is to be launched in year 2025. A production platform is under construction in Astrakhan and is to be towed more than 4,000 km on Russian rivers to Kaliningrad for completion before 2024.

The platform will be the second offshore platform on the Russian northern shelf. From before, only the Prirazlomnaya oil platform is in operation in the Pechora Sea.

The Kamenno-Mysskoye field is operated by Gazprom and holds about 550 billion cubic meters of natural gas.

In the making is also the Semakovsky project, a field developed by Gazprom together with company RusGazDobycha. The companies in June this year announced that a final investment decision had been made and that the field is to come into production in 2022. The field holds about 320 billion cubic meters and the first of 17 wells are to be developed in the course of 2020, according to the companies.

Like the Geofysicheskoye, also the Semakovskoye field is located partly on shore, partly offshore.

The massive field development in the remote bay is putting significant industrial pressure on local vulnerable ecosystems. Researchers warn that the massive ongoing dredging conducted to open the waters for bigger ships ultimately could ruin the rare local fish stocks.

The Ob Bay and adjacent peninsulas of Yamal, Gydan and Taymyr are among the areas in the Arctic that is experiencing the most rapid increase in temperatures.

Figures from the Russian meteorological service Roshydromet show that parts of the region in the summer of 2020 were more than 5°C above normal. That follows several years of dramatic warming. According to the climate researchers, average winter temperatures along the Northern Sea Route, the waters located along the country’s Arctic coast, have increased by about 5 degrees since the 1990s. And the warming is most significant in the areas around the Kara Sea, the latest climate report from the institute reads.

Among the consequences is a rapid sea-ice melting that is ultimately leading to easier access for ships and drilling platforms. Oil companies appear ready to rush to the remote region to tap into the vast reserves.

They are in a hurry. In several of their key export markets, demand for oil and gas is in rapid decline.